As always we prepared ourselves for our Australian holiday. We, or certainly I, could hardly wait to start our journey to Australia. This year we were a bit earlier than usual and so we arrived in Australia on October 30th.

After we had a more comfortable campervan last year, we thought about going back to the small Toyota Hiace for 2018. Well, at the end the bigger Mercedes Sprinter convinced us, which was a great decision.

We soon headed from Perth to Margaret River to Karin & Patrik. To our surprise, both of them were already there - including junior Levin. Patrik was just repairing my board and soon we were in the Aussie flow. We underpinned this with a classic Aussie BBQ .

After 2 days in Margret River, we could identify a nice swell on the map, which was heading north so we decided to start the journey up north. Patrik handed me another prototype board and said "this is exactly your thing, you'll love it". Ok, I thought an 85-litre board would be a bit big but let's have a try. 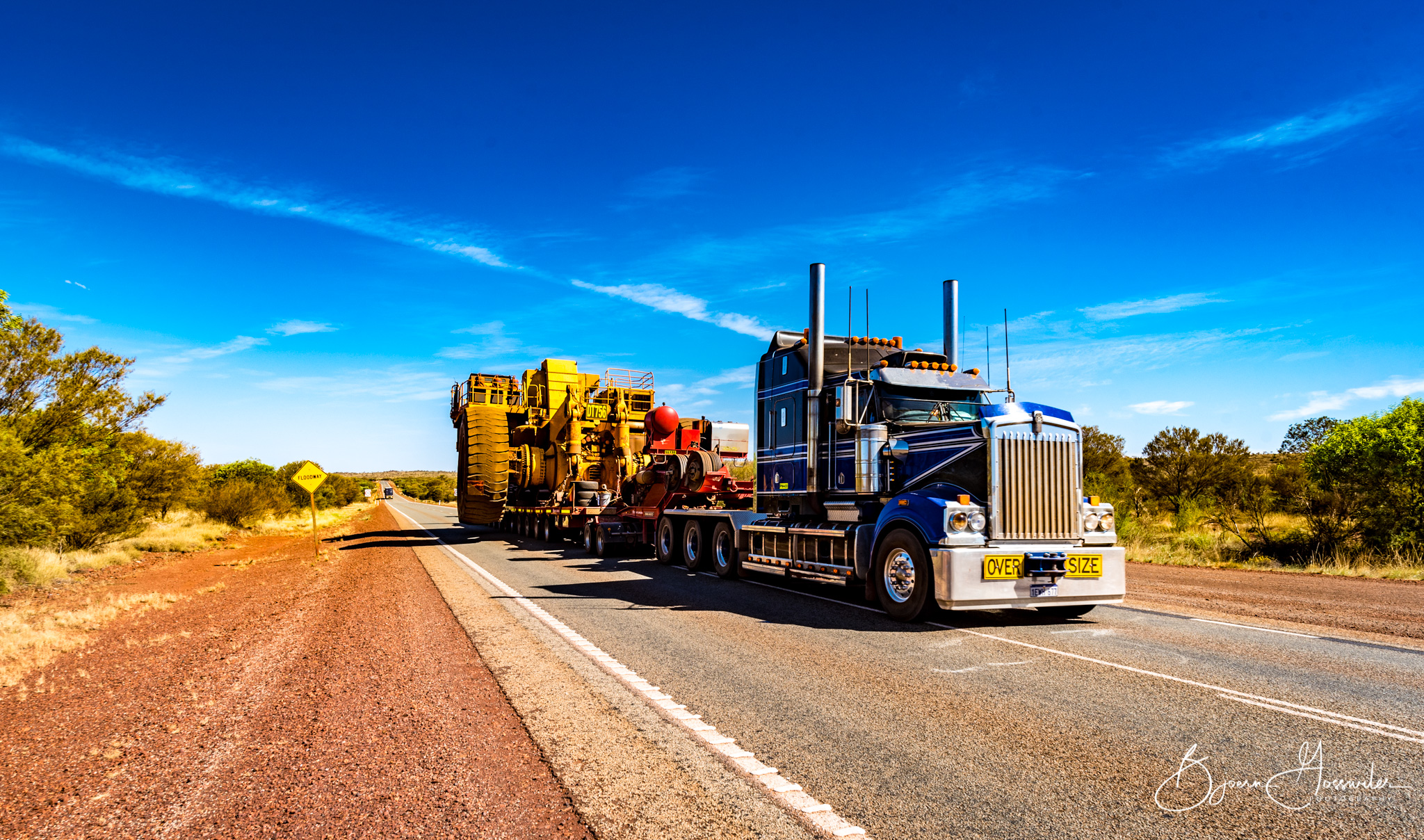 On the way up north

For a change, we had to drive again! The 1400 kilometers were done after one and a half days. The next very important thing was buying food and water for a month in Gnaraloo. Not necessarily my favorite activity after 16 hours driving. However, since Esthi had the lead, I could limit myself on pushing the shopping cart and was mentally already shredding the waves. We managed it in 3 hours and were relieved by 700 $. Everything was thrown into the campervan and we went off towards Gnaraloo.

We were well on time therefore I drove relaxed with 80 km/h on the dirt road to the three miles camp. Esthi had the pity and therefore we drove directly to the carpark because she knew that I wanted to hit the water as soon as possible. From the carpark we saw 3-meter waves rolling in and there was wind for the 4.8 m2 sail, just right for warming up and testing Patrik's prototype. 20 minutes after arrival I drove towards the lineup. Somehow, there was not much water and my fins made contact with the reef twice in quick succession. Therefore I felt guilty about having damaged the fins in the first 5 minutes on the water.

On the first wave, the bad feeling disappeared and I enjoyed the very first turns after one year of absence. Super stoked and the "big" board drove like a little slasher.

After more than 2 hours on the water, I was completely flat. Ok, the sun was gone and I was alone in the break. It was time to finish the first session. Esthi helped me to carry the material back to the campervan and we arrived at the camp in the dark. 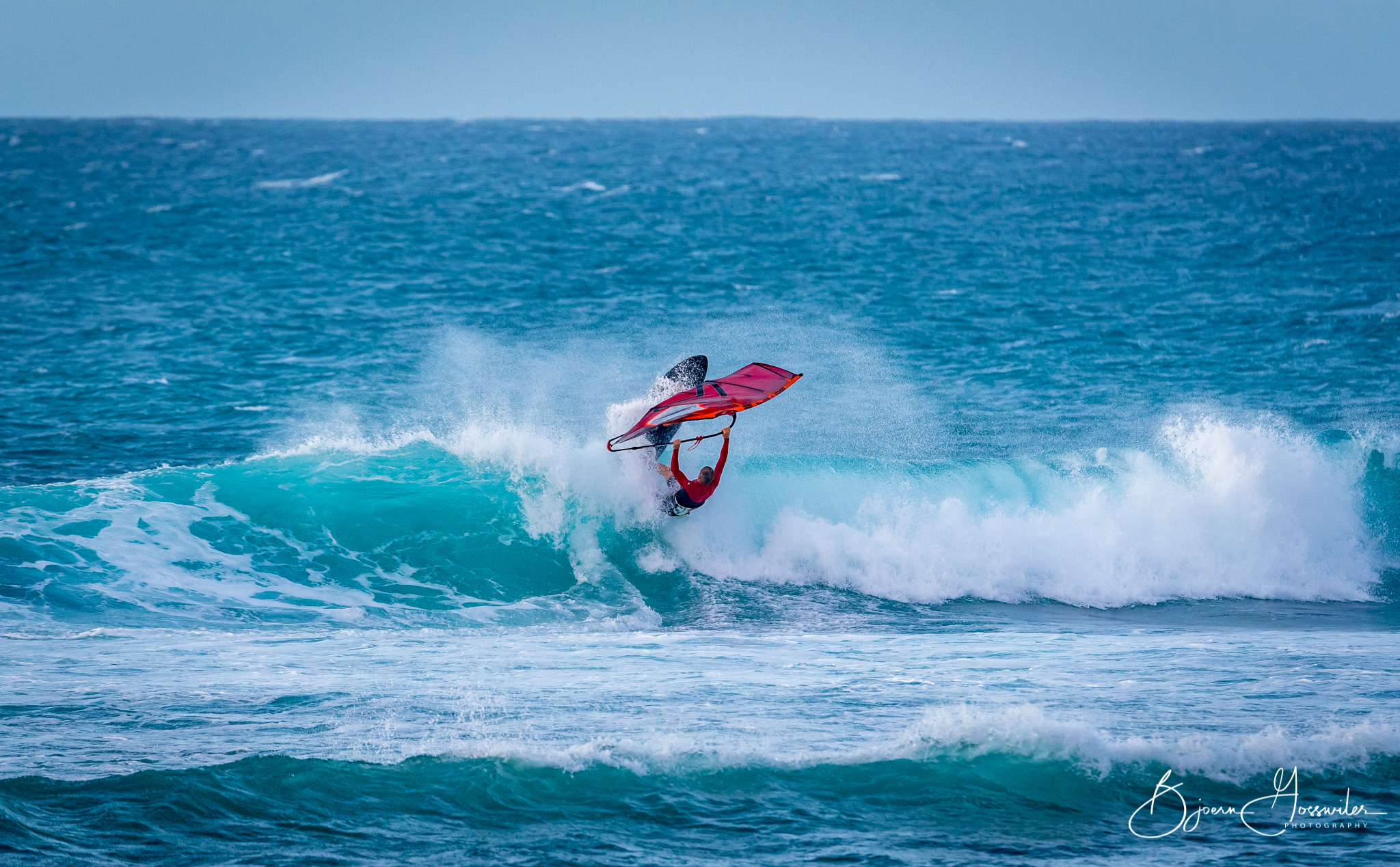 Warm up at Gnaraloo late in the evening

After a few days, we were able to settle in the Hilton, which gave us some room to store our food and served as a good material depot.

This year it was quite cold. For the entirety of the first week, I wore a long wet suit because it was just too cold for me. In the evening, we had to wear down jackets and caps, but on the other hand we had very few flies.
Unfortunately, we were not privileged to grab a bigger swell during our trip up north. In order to precede we had a great swell but sadly, the wind was so strong that we could sail only for a half-hour after the sea breeze kicked in - afterwards I was completely overpowered with my 3.9m2 sail. Specifically this meant flying sand (peeling) on the waves and a view like fog because the sand was blown out to the sea... Having said that in the evening was one of the best sessions during our trip. I started with 3.9 m2 sail and switched soon to the 4.4 m2 sail. Moreover, this session was awesome. Tobi and I were shredding waves until it was dark.

For a change, I tried to boulder something on the sandstone. It was a lot of fun, but I guess nobody ever had this idea before so I had to clean the rock first and see what's inside the holes (Spiders, Snakes …). Without a crash pad, it was difficult to relax, because the sandstone proved to be very unstable. It was fun anyway.

After three weeks in Gnaraloo and no bigger swell in sight, we thought about visiting another National Park. I had done some research before and convinced Esthi that the Karijini National Park would be worth a visit. As it is just around the corner - 850 km including Gravel Road - it could be reached in one and a half days. So, we started prematurely on the way towards Tom Price.

Arriving in the National Park we were tired from driving. Added to this, it was quite hot, 40 degrees and the flies were super annoying. We soon began to doubt our decision, but we decided to walk to the attractions. We were quickly rewarded. In the Canyon, it was much cooler and almost no flies anymore. The groundwater invited us to a refreshing swim, and the fresh water was a relief. A great experience, which made us happy that we embarked on this journey. 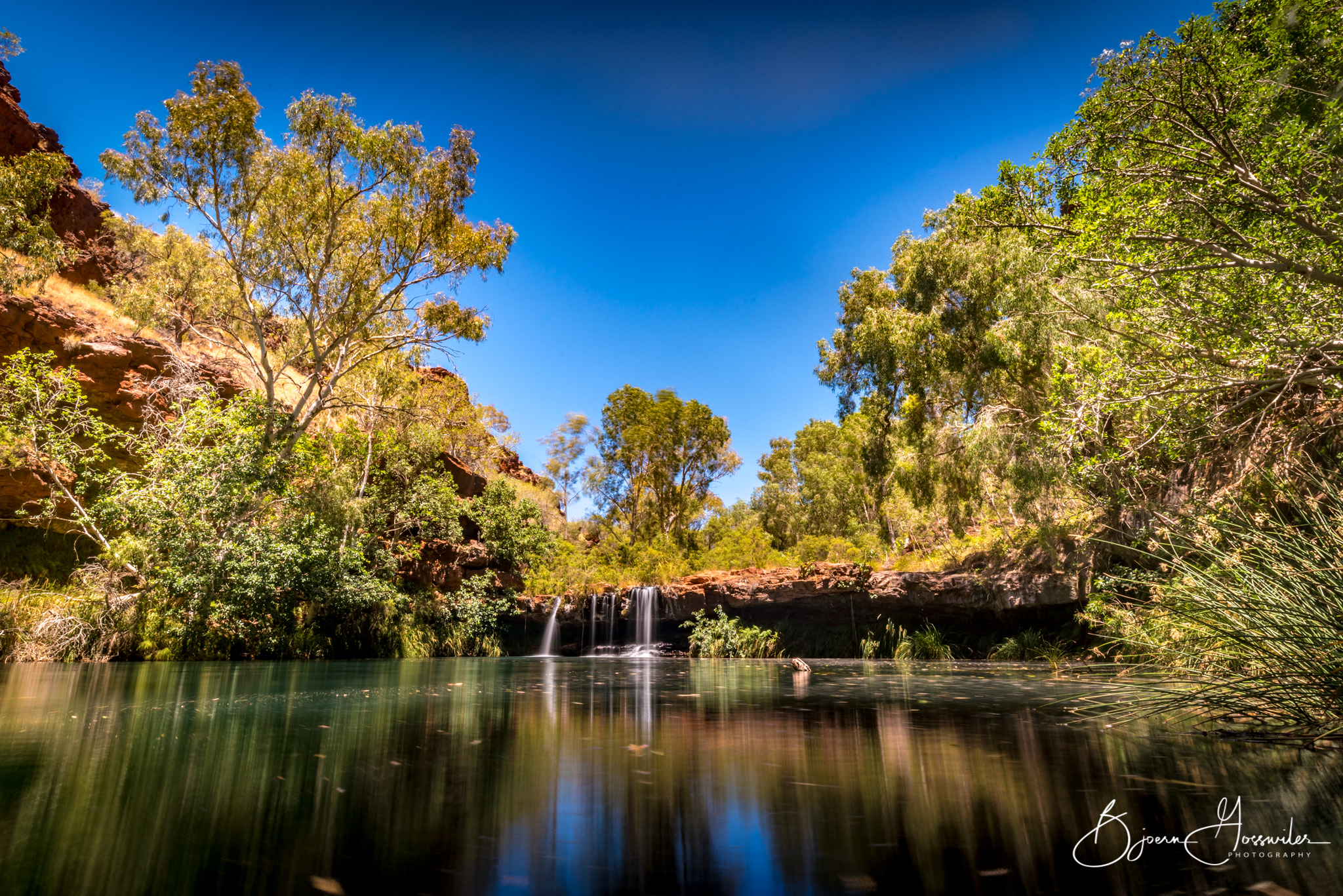 Overnight we were in the Eco Lodge, which seemed very luxurious to us. Ok, after three weeks salt-water shower from a dripping tap this was not so difficult. In any case, we enjoyed the freshwater shower and felt re-born. The next day we continued with part two of Karijini National Park. First, we made a 2-hour hike in another canyon (Gorge3 rim walk) where you could also enjoy a wonderful swim.

Back at the campervan, we decided to drive towards Perth via Newman to Margaret River.
On Wednesday evening we arrived at Karin & Patrik’s house. A warm welcome and BBQ was exactly what we needed after one day on the road. For Thursday was a nice swell and wind was forecast. And that's how it happened. We made our way to the Main Break in the early afternoon. The wind was way too strong and unfortunately a bit onshore. In addition, the temperature shock hit Esthi and me, as we were one day before in 40 degrees on the way, now we were at the Main Break at 19 degrees with a stiff breeze from southern direction, brrrrrr.

I went out with 4.4 m2 sail and was close to being overpowered. Patrik and Karin were also there and so we swapped boards a few times to test and compare. After all of us were completely frozen we stopped the session.

As a reward, we went to Ivan for a delicious pizza, a must for those who are in Margaret River.

To sum it up, it was again another sensational trip with no accidents and a lot of new impressions.