It all started at the beginning of this year when Alexandra mentioned that it would soon be time to go for another climbing trip together. I thought this was a good idea, but I wasn't sure if my holiday account would give me an extra week of climbing holidays.

After checking the holiday balance several times I saw the possibility to plan a week of climbing in combination with a long weekend. Therefore we fixed the date for the last week of May. The destination was still undecided.

In February Alexandra planned another climbing trip with Michele and Markus and their son Finn. They made the decision to travel to Greece for 2 weeks over Easter, more precisely to Leonidio.

The destination would have also attracted me, I said then to Alexandra. She replied that this wouldn’t be a problem and we could also go to Leonidio. And so it was already clear where we would finally go.

But unfortunately, Alexandra had a terrible climbing fall sometime in March and twisted her foot so badly that she couldn't climb for almost 2 months! That meant that during the Easter holidays she could only climb a few routes toprope to find out that the foot still wasn't ok. 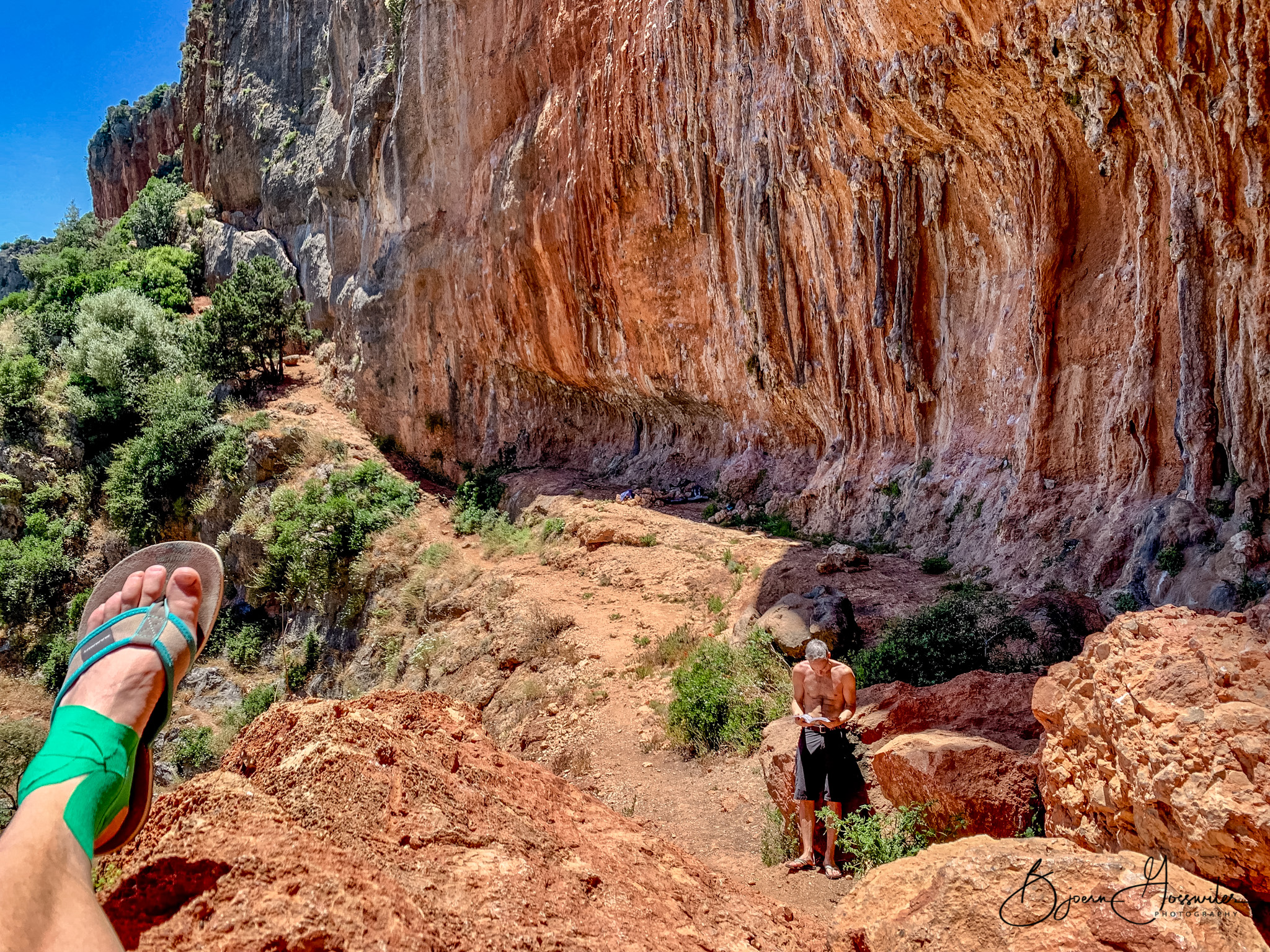 Over Easter, I was in Peru surfing & windsurfing (some pics from this trip) which was of course very cool too, but then, I returned with fever and diarrhoea! As a result, I only had 5 training days until our trip to Leonidio started. It was quite similar for Alexandra, the foot was still not ok, but she was at least able to build up some strength with a few training sessions too.

Consequently, we both travelled more or less without climbing training to Greece. But since we are both quite laid-back, that was not a problem at all, we just decided to look from day to day what we wanted to climb and what was feasible. 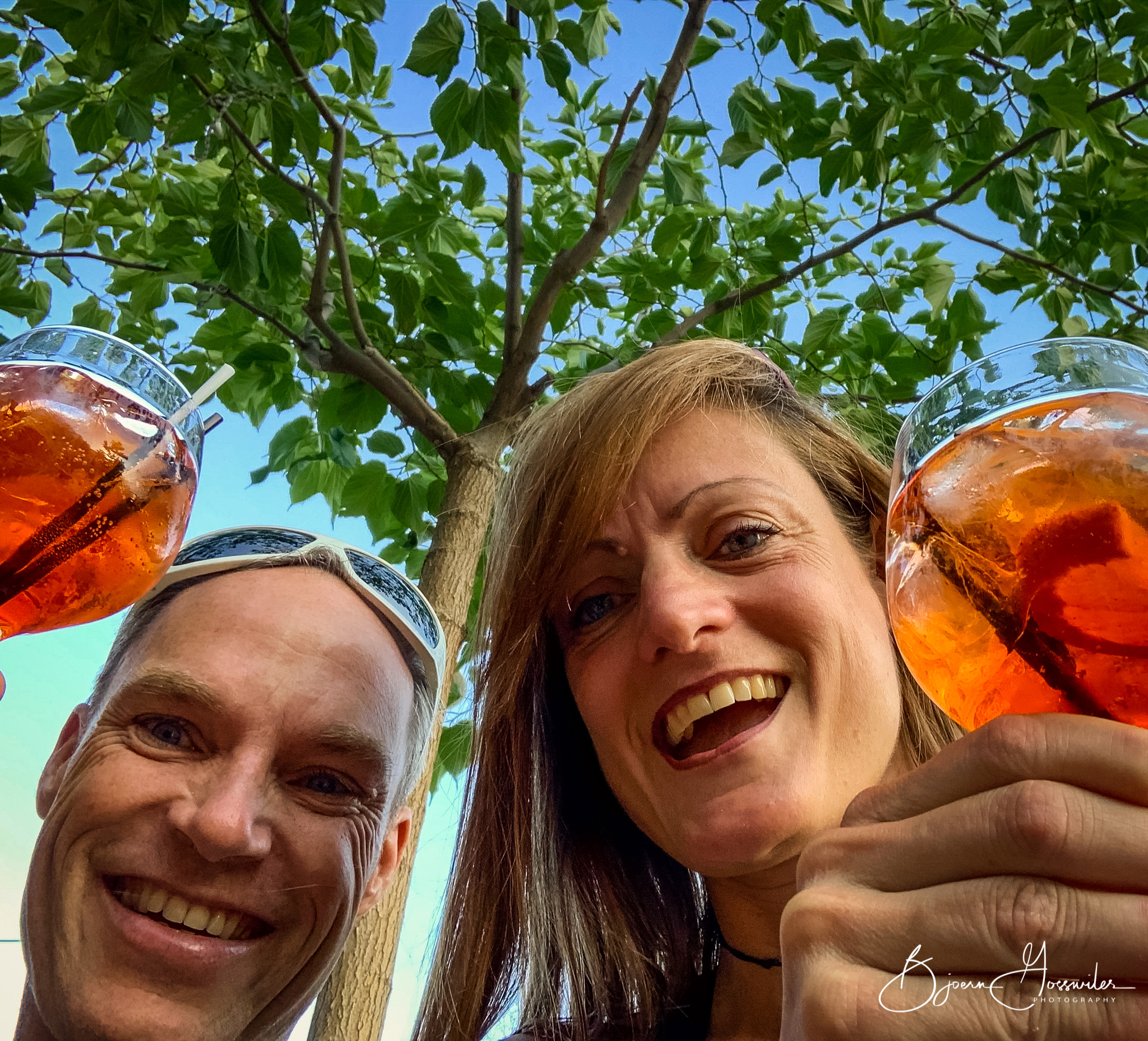 Arriving in Athens, a 3.5-hour car journey lay ahead of us and we then arrived on Saturday evening in Leonidio. The weather forecast was sunny and hot for the whole week, which would make some people nervous, but as I said, stay cool and enjoy the holiday.

We had a good rest and went out for breakfast on Sunday morning and took a look at the climbing guide. Somehow we got stuck at the sector "Berliner Mauer" and so we set off shortly to the crag after we had finished our breakfast.

Unfortunately, we didn't find the way to the crag right away, but this had the advantage that the rock was in the shade when we arrived. The rock was very good and we climbed some nice routes.

Somehow this was the pattern for the upcoming week, breakfast and then at noon towards the rock. Luckily there are a couple of areas in the shade.

There was something for every taste, from easy wall climbing to overhanging tufas. The only disadvantage was that the ratings often didn’t match the difficulty levels, once too heavy, then too easy and in the crag Jupiter the belay station was drawn completely wrong...

We then met a local climber in the crag Sabaton who was about to check all routes for their grade and said that the next version of the climbing guide would fix the problem.

But this didn't reduce the joy of exploring the great routes on this wonderful rock. A beautiful place with still endless potential and I think I can say that this will not be our last time on Leonidio.