It was once again mid-November, time to leave Switzerland for a couple of weeks of windsurfing Down Under. I was thrilled that Esthi was with me this time. I had an exhausting week prior to our trip. On Friday night we boarded the airplane destined for Perth with a stopover in Dubai. We landed in WA at 1 o'clock in the morning. But hey, nothing to complain, I mean the forecast for the next few days looked good in every perspective – start of my holiday, blue skies, and a decent swell.
These factors in mind made me desperate to get moving because I really wanted to catch those waves up north.

With such a forecast it was clear, there was not much time to mess around. Therefore, we tried to get our campervan as fast as possible. At 07:45 that morning we were already on the road southward to Margret River, to Patrik and Karin's house where part of our windsurf gear was stored.

When we arrived we removed our gear from the shed and started to fill our van with equipment and tools. Before it got dark, our van was ready for the long trip up north.
We couldn't leave before visiting another couple, Gudy and Bruno. We were greeted by an injured Bruno who had an accident with his mountain bike! It was nice catching up with them & spending a cosy evening in their home. Surprisingly we didn't fall asleep at the table after such a long journey.
Due to the time difference we awoke early the next morning and started our north bound trip. Everything looked perfect (timeschedule etc.) but after we passed Perth the van's electronics spun-out and we got some wired warnings from the dashboard display. Therefore, we decided to return to Perth and get the van checked-out. After some discussion with the rental company (I was feeling nervous because of losing so much time), we managed to get a replacement and an upgrade. 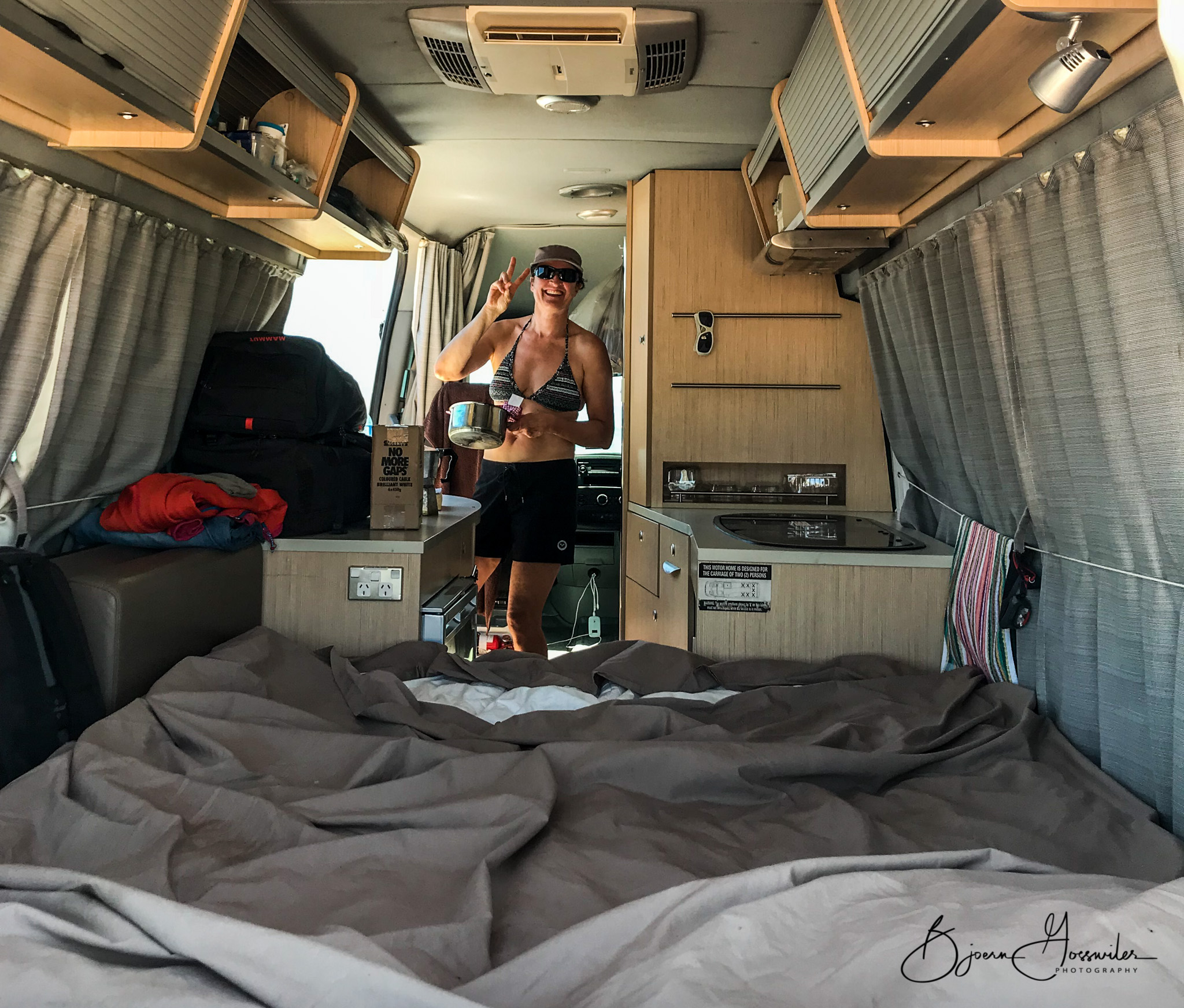 Nice upgrade - It seems that Esthi likes it too

After a kind of re-packing (we threw everything in the “new” van), we were once again on the road heading north. We didn't make it to Gero, but I calculated that when everything worked out, we would arrive at Gnaraloo by 4:30 in the afternoon.
No sooner said than done, we arrived just in time. The set waves where nearly mast high and there were only a few guys out. I was so excited that Esthi reminded me that we were 10 hours on the road and that this was the first day wave sailing. I didn't really listen to her because in my mind I was already on the water. By the way, that day I rigged the brand new 2018 Severne S1 pro 4.4, which I have to say, is an outstanding sail. 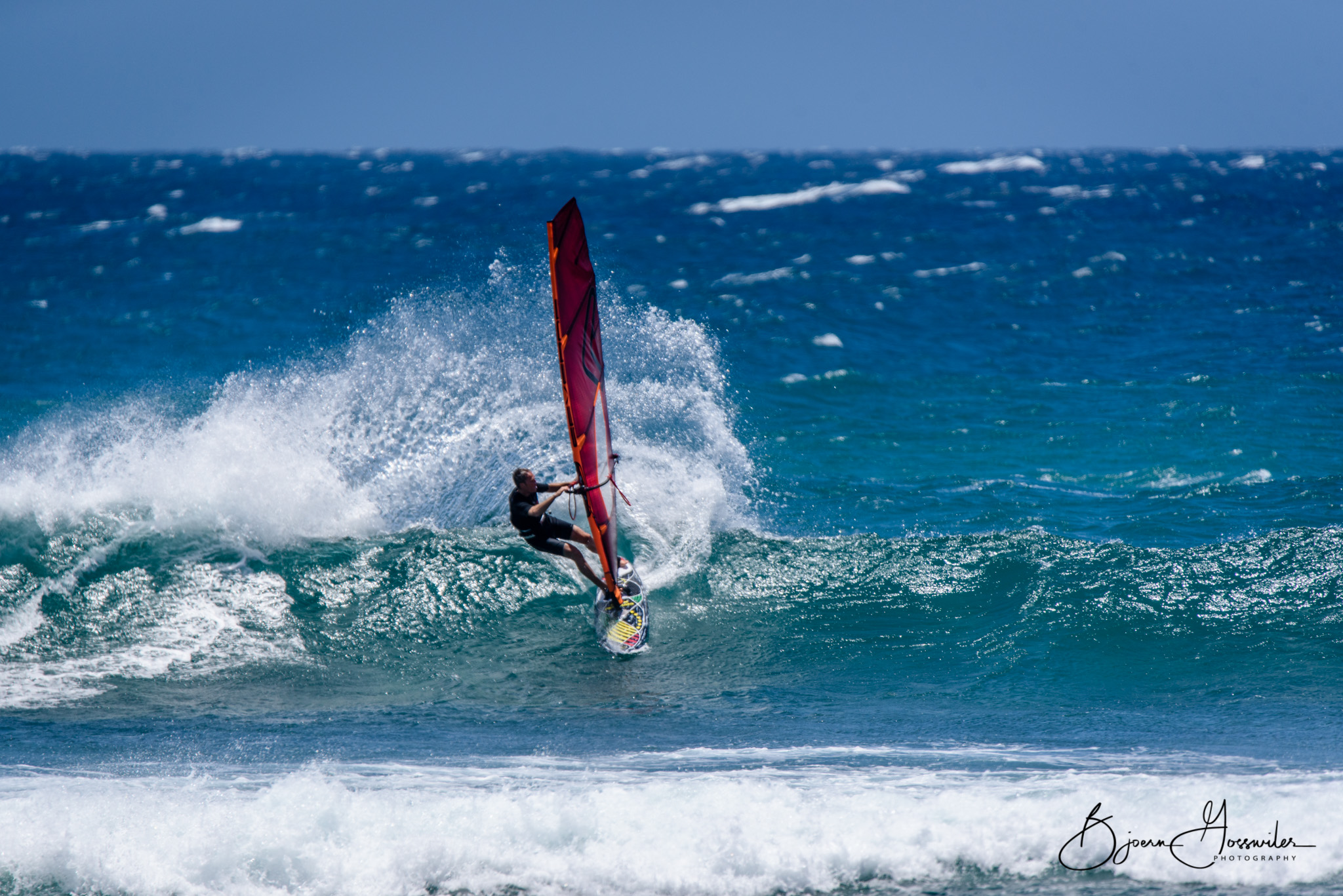 On the first wave, I tried not to take too much risk, so I cruised through the break and it felt like coming home. The second wave started to run down the line and I was perfectly placed. So first turn, nice hit - already a bit late and then for the second turn, I was too late. Quick decision let the gear go and get washed. After a couple of somersaults, I surfaced and saw that the sail was split from the board - damn, what did Esthi say to me, take it easy??!!! Decision making time – save the board or the sail? I went for the sail and tried to swim in with it. Luckily, a guy (Ole) held my board preventing it from getting damaged on the rocks.
I was curious what happened to the mast foot but everything looked ok, so I plugged the board and sail together and went back to the ocean until sunset.

After having the first coffee in the morning, I had to double check why the sail and board split. Then I realised what happened, the mast track was broken on both sides - the whole mast foot had been torn out!!! It was clear, that this couldn't be a do-it-yourself fix but had to be repaired professionally. 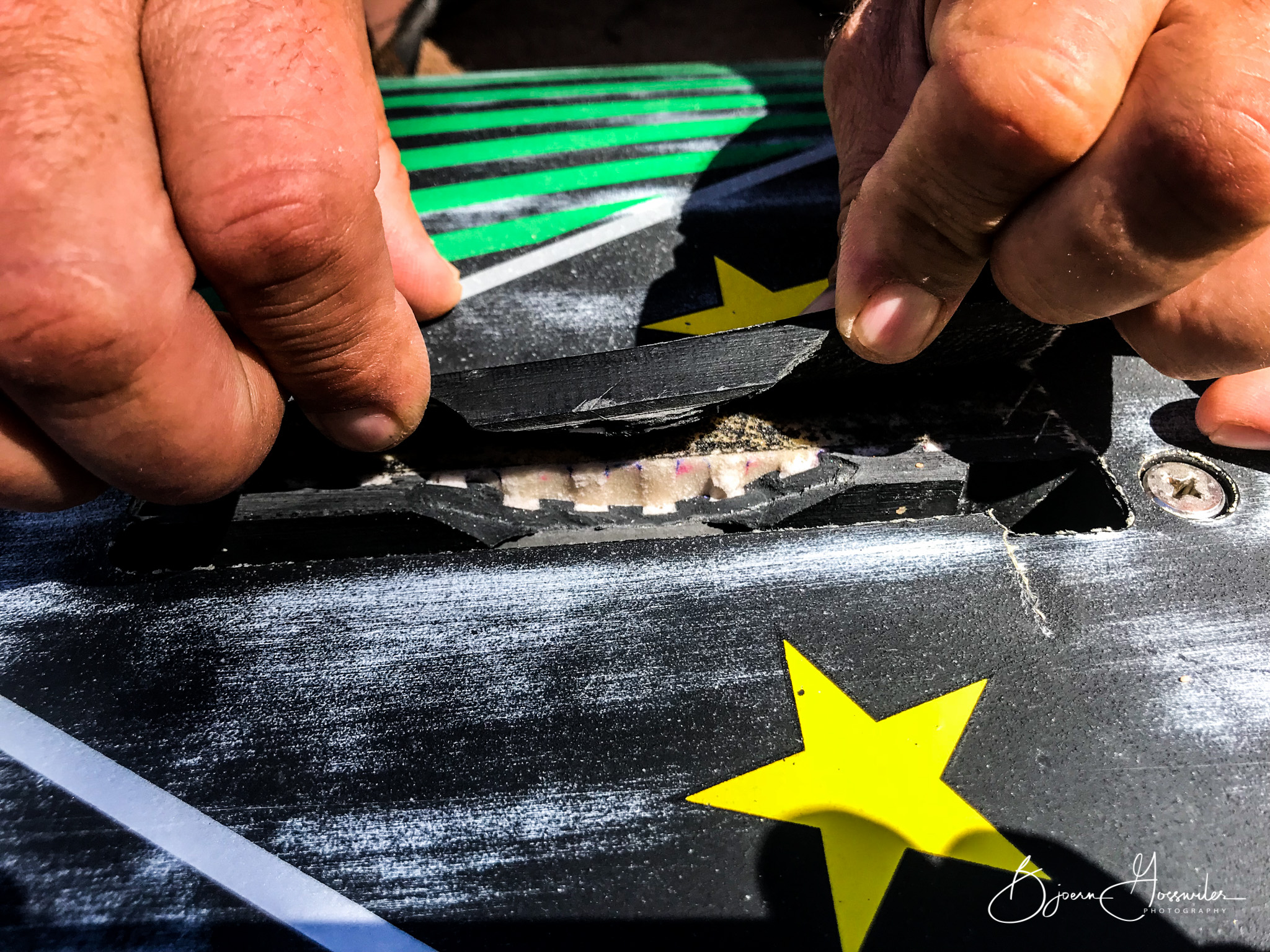 Luckily, I could borrow a board from Bruno and Massimo for the rest of our time at Gnaraloo, this saved us a 1,000km drive to get the board mended.
After this nice welcome swell, it was more or less all we got (in terms of waves). I mean we had a great time, lots of head high wave days (as shown in the upper picture), but we didn't get another decent swell.
After two weeks there was cyclone arriving from Indonesia, with a 5-day forecast of no wind and possible showers. We considered where we wanted to spend our last 10 days. After consulting the weather forecast, we decided to hit Esperance, a place we had never been to but had been talking about for 10 years. I know why, it was an additional 2,200 km drive!
We finally made it and well worth the effort: stunning beaches, fantastic landscape and two days of side-offshore windsurf conditions at Observatory-Beach so what more do you want?

After spending those two days windsurfing, we decided to visit the Le Grand National Park, which was also, a good decision. A sunset at its best with an attractive & relaxing environment optimal for a BBQ.
The bad weather arrived so we started our drive back to Margs and conclude our last days there before we had to head home again.

Unfortunately we couldn't sail in Margs because there was no wind whatsoever. Nevertheless, it was nice to see everyone and have a good time together while drinking cold beer and chatting around the BBQ.

To sum it up, it was another sensational, trip with many new impressions and of course, it was great to share them with Esthi by my side.

Direct link to the pics